I’m sorry I’ve kept you waiting instead of reporting directly after the APW! At least you didn’t miss actual code being worked on for the GLR. There was a whole lot of discussion, though. I had the privilege to watch and listen and occasionally speak up. These people surely know their stuff! Patrick Michaud has written a post on his blog that summarizes the decisions made and things found out.

I also announced that discussions would happen about what ought to be in Perl 6.0.0 and what should wait a bit still. That hasn’t been done intensively at the APW, but that’s not too worrysome. The rough consensus is that we’ll have NFG (Normalized Form Graphemes, see S99), NSA (Native and Shaped Arrays) and the GLR (Great List Refactor™).

So, let me talk a bit about the APW. Aside from very pleasant socializing, there were of course a whole bunch of Talks. I had planned to present the thing I’m cheekishly calling RoR, but I ended up not writing a single line of Code for that project so far, so instead I started doing a little bit of Game Development. You can find the result on my github repository “gtk_cairo_shooter”. I was quite (pleasantly) surprised when I noticed the performance wasn’t actually terrible. After all, Rakudo Perl 6 is supposedly crazy slow, right? Turns out it’s fast enough, even if you spend about half the time of each frame rendering vector graphics entirely in software …

My second lightning talk was about a little “live coding” tool – very similar to jnthn’s “code golf assistant” – that lets you play with cairo. The code can be found in the same repository that also has my little game.

Of course there were other great talks there as well. It’s a safe bet to say that jnthn’s talk was among the best, but nine’s talk about Inline::Perl5 certainly astounded a whole bunch of people! Instead of going on to list all the talks, I’ll just recommend you wait for the recordings to become available and watch them by yourself. The speakers are certainly better at giving their talk than I am!

During the Hackathon, there was lots of discussion, hacking everywhere, people trying out Rakudo Perl 6 for the first time ever or for the first time in years. Unfortunately I was quite exhausted, so I didn’t end up talking to many of the other attendees 😦

One person I did talk to was Tim Bunce, who complained (constructively!) about the quality and amount of documentation we have, as well as the fact that it’s very easy to stumble upon very outdated content via search engines etc. Better “on-ramps” are certainly high on our “most wanted” list for the near future …

After all this talk about APW, I’m realizing you’re following the weekly because it’s a somewhat succint summary of what’s been worked on a weekly basis. So here’s the usual assortment of Perl 6 improvements in bullet point form:

Two more things worth pointing out that don’t quite fit into the bullet list format:

masak has been writing a whole bunch of posts about macros. These are meant to be kind of a “request for comments”, so feel free to point out things you find wrong/lacking/unsound/…

azawawi has been working steadily on improving Farabi6, a web-based IDE for Perl 6. The newest design is inspired by the way the IPython notebook handles code “blobs”. I kind of like it and I’m very eager to see what Farabi6 is going to look like in one or two month’s time and I’m hoping I can get a few patches in as well. I’m thinking it’d be a pretty lovely thing to have in Rakudo::Star! Here’s a screenshot for you: 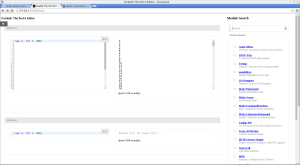 Even though this post is already quite a bit longer than the usual ones, I still feel like I’ve forgotten something

Ah well, it won’t be the end of the world!

Got something to note? Cancel reply